We strongly believe that for the majority of people making a transition to spending some, or most of your time in a minimalist or barefoot shoe can have a profound effect on injury risk, performance and general postural health.
There are, however, a few cases where it’s inappropriate and downright dangerous to make the change:

When you are carrying a niggle or injury It’s probably not a great time to be introducing a new stimulus to the body.
Instead, focus on getting healthy, get that injury managed and settled down and only then look into making some longer term changes to potentially reduce injury risk in the future.

If you have recently been given orthotics

Orthotics are a great tool to correct for an imbalance or to deload certain structures in the lower limb if you are injured or have ongoing postural/control problems.
They are however a short-term fix. 8 to 12 weeks or orthotic use should be more than enough to solve the given problem before weaning yourself back off them with the help of a graded return to sport and a strengthening program.
Most people shouldn’t have to live in orthotics — for more on orthotics and pronation check out this Podcast.

If you are too far gone

For some people, making the change to barefoot just isn’t inappropriate or feasible. If your foot looks something like this:

No magical shoe, orthotic or running program is going to miraculously fix that. It might be that the deformation of the bones in your foot have reached a point where they cannot be corrected short of surgical intervention (this is a pretty extreme case).

If you are an elite athlete performing at a high level and training huge volumes, adding the brand new stimulus of barefoot running or making drastic changes to your running technique probably isn’t a great idea. It’s this type of situation where  “Don’t fix it if it ain’t broke” applies perfectly.

For the rest of us, who are looking to shake persistent injuries, improve running performance, or improve general wellbeing and posture, making the gradual shift to barefoot is well worth the investment and time.
If you do it right.

The first step is to look at what the heel to toe drop of your shoe.

We have written about this before, and this page is a good place to start (although it only compares Nike’s). You should aim to work down in gradients over a 3-6 month period working from 12mm (typical structured running shoes) to 8-4mm (Nike 3.0 for example are mostly 6mm)  then ultimately a 0mm.

Don’t throw out the shoes with each progression though you want to keep them for the next step.
It’s also a cool idea to get a photo of your feet at this stage for a nice before and after shot of the shape and resting posture. Try taking three angles from directly in front (both feet), directly behind (both feet), and then a medial view of the arch (one photo for each foot).
Store these for future reference.

Jumping straight into a zero drop shoe and wearing them to school or work 5 days a week, or even worse trying to run a 5km on day one. The slow and steady introduction of zero drop is essential to allow supercompensation and avoid a volume loading error.

For a lot of people the changes at this stage are already dramatic; elimination of lower back and knee pain, improved balance, speed, and agility. The six-month mark is also a great time to take some after photos to see how far you have come. Pay big attention to the angle your big toe points, the width of your midfoot and the height of your arch.

It’s finally time to start some impact training in your barefoot shoe. The previous six months have been an acclimatisation period readying your body, strengthening the bones, muscles, and tendons of your feet and lower leg preparing you for this day.

But as with everything in the world of athletic development and rehabilitation, a competency-based progression is much more valuable than a calendar based one, so you still need to have achieved and maintain these four key criteria in order to progress to running in your barefoot shoes.

This is all good and well, but what does the running program actually look like?

For the first month or so, simply start with technique based running drills. Pocket run, double leg springs, stride outs, skips, piston run, these drills will help introduce some elasticity and reactivity into the Achilles tendon and allow your feet to adapt to having to support and work themselves as opposed to having formerly relied on your shoes. 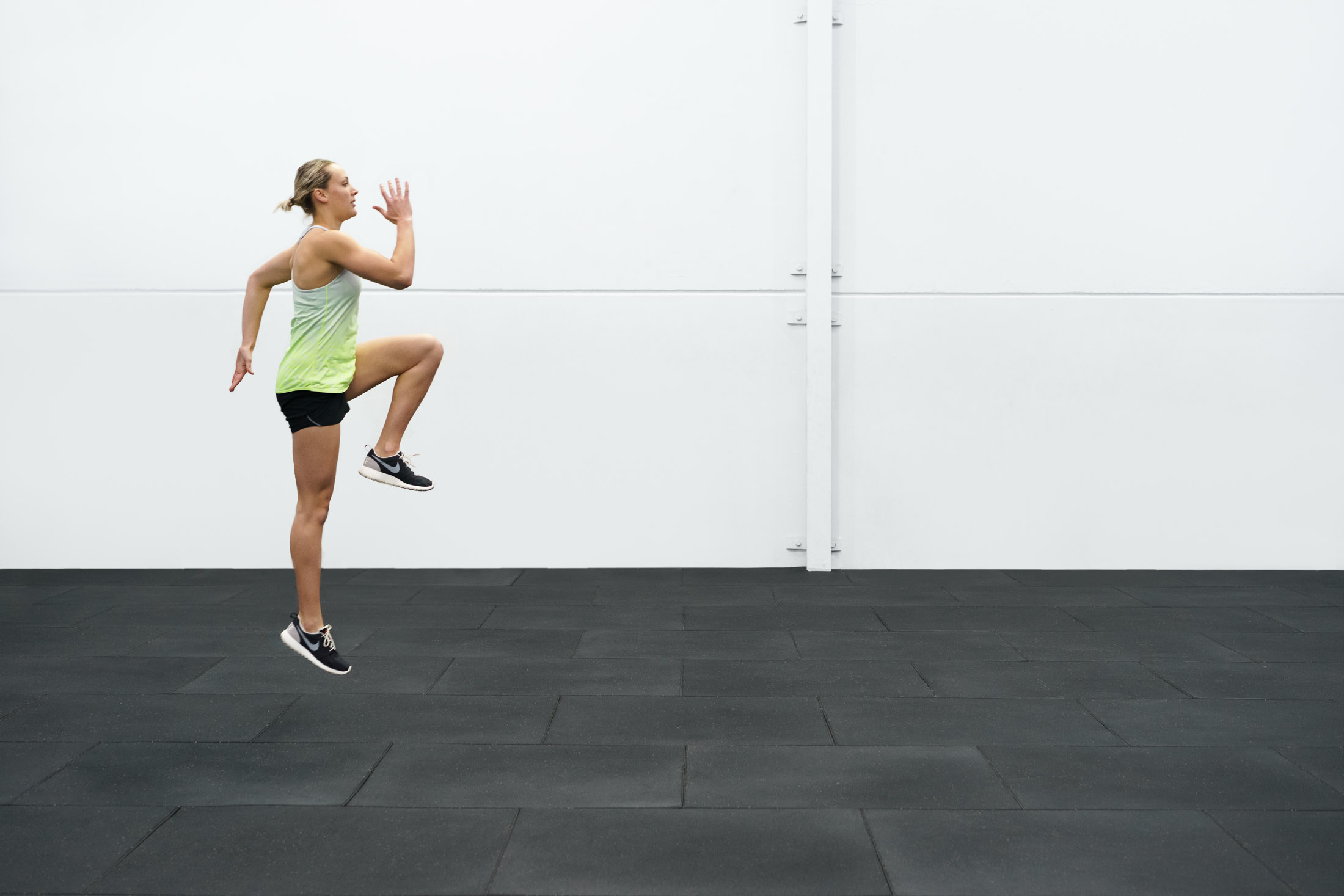 Then, given no hiccups or problems during that phase, next stage would be to introduce actual running in the barefoot shoe as part of your regular running program.
I think the smartest program is from Canadian physiotherapist Blaise Dubois who recommends you start with just one minute per run per week in this Podcast.
Do your normal length run, but in the first week, you do one minute of that run in a barefoot shoe. And then swap back to your normal shoe for the remainder of the run. One minute barefoot, 29 minutes old style of sneaker.
In the next week, you do two minutes barefoot and 28 minutes other style and so on, until you have fully transitioned into the minimal shoe.

I want to learn more about the program

Designed to help athletes of all ages playing team and ball sports improve their speed, efficiency and reduce their injury risk through improved running technique.

Transitioning to a barefoot shoe really is a full 12-18 month process that should be done as gradually and smoothly as possible. Individual results and speed of adaptation will vary so be sure to adjust according to the feedback your body gives you.

The Conditioning Continuum: Is it possible to get 400m fit without running further than 50m?Fitness & Conditioning, Running, Sports Performance, Sports Science, Sprinting

Toga – Yoga for Your ToesShoes